History of the Tram Transport

On January 18, 1892 the board of representatives of the town decided to build a metropolitan railway with steam drive. In further five years a special commission elaborated a project for building of an electrical railway and a power plant. The works were entrusted to the company Siemens & Halske from Vienna with a budget of 303396 guldens. The building operations started at the end of the year 1897. The licence for building and running of the electric railway was issued by the king and emperor's Ministry of Railways in Vienna on August 16, 1898. 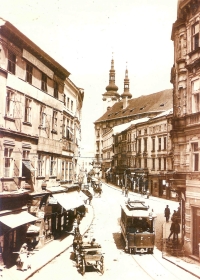 The tramcar railway was a monorail one, with six turnout points and a loop near the railway station and with a standard gauge of 1 435 mm. The line led from the railway station to the former and today's Upper Square in the shortest direction. From here one branch branched through today's Riegrova, Palackého and Litovelská Streets to the Road Míru with a turnout point behind the crossing of the Dvořákova and Na Šibeníku Streets. The second branch led through the Pavelčákova, Havlíčkova and Wolkerova Streets and finished with a turnout point near the Faculty Hospital. The whole building length amounted to 5,335 km. A delivery track with a length of 448 m led from the Upper Square through Opletalova, Zámečnická and Sokolská Streets into the car shed, which was a part of the power plant building. The performance and technical tests took place on March 28, 1899 and on Saturday, April 1, 1899 a regular service with nine motor and four delivery railcars was opened. Many town citizens and the people from environs took part. The highest maximum service speed was 18 km/h according to the order, which made possible to determine an interval of 7.5 minutes in the main section. The both branches were serviced in fifteen-minute intervals. In the remaining nine months of 1899 878 351 passengers were transported, in the following year 1 123 772 persons – the number of the town citizens amounted to 21 707.

The railway was enlarged for the first time in 1914. The railway was extended from the Road Míru to cemeteries, in 933 to the military airport. In 1934 the railway was extended from the Faculty Hospital to the church in Nová ulice. At that time the whole length of the operated line network amounted to 7,432 km, building length amounted to 7,528 km. In 1936 the loop of that place was removed because of building of a new object of the main station and it was replaced by a turnout point with two stabling sidings. After forty years of the operation, in 1939, the highest output was achieved, namely 5 230 081 transported persons. In 1940 the number amounted to 7 846 852 passengers. The frequency increased and therefore the railway was rebuilt to a double-track one. Since the beginning of rebuilding in 1940, the section from the main station to the bridge over the Middle Moravia has been rebuilt during the war years. The top output was achieved in 1944, when 9 567 700 persons were transported. 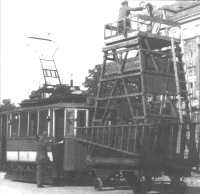 After removing war damages, energetic sources and consequently the town power plant have been nationalized. The metropolitan railway has been since its origin a part of the company Elektrické podniky of the king capital Olomouc, later called only capital Olomouc. It has remained together with the bus service in administration of the town under the name Dopravní podniky hlavního města Olomouce, later Dopravní podniky Jednotného národního výboru Olomouc, komunální podnik. In 1953 the enterprise Dopravní podnik města Olomouce came into being in today's form.

The division of the enterprise did not injure the metropolitan railway in any way, on the contrary. In 1947 a double-track line was built to the suburbs Hodolany. In 1948 the line was extended to Bělidla. In the years 1949 - 1952 further line sections were rebuilt to the double-track ones in turn, and the turnout point near the crematorium was replaced by a track loop in 1953. In 1954 the largest and the most complicated building operation began, namely transferring of single track sections from the area of the Upper Square to the today's route Pekařská Street - 8. května Street – the Square Národních hrdinů – the road Svobody. In 1955 this track section was extended to the market hall and finished by a loop.

In the following years large rebuilding of the tramcar railway started, incl. rebuilding of trolley line and cable distribution systems. The track section in the I. P. Pavlova Street was cancelled and it was replaced by a new track in Brněnská Street in 1981, which was completed with a double-track loop in the Hraniční Street. In 1997 a new tramcar track section was opened connecting the main station with the market hall through the Kosmonautů Street and the loop near the market hall was cancelled.

You can also find us at: